skip to main | skip to sidebar

The Meeting of the Minds 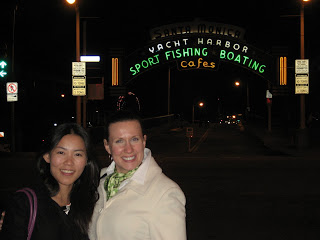 There are two women and two men on the Moniker Executive Team. I am part of the former duo, and so, naturally, I wanted to check out the other half of the female compliment. (That's Victoria on the left, me on the right)

Until last week, I had only met Victoria over the phone and via e-mail, and knew her only by her bio. We are truly a global team, each of us living in a different country: Canada, China, Australia and the United States. We meet weekly as a team on a conference call, and these calls have become the highlight of our lonely work weeks.

But there’s something about meeting in person that can never take the place of technology, no matter how good the connection, picture or e-mail. And so my husband and I booked a working holiday and headed off to Moniker’s head office in Santa Monica to meet Ms Victoria Wu, COO of Moniker.

Victoria’s bio is nothing short of impressive. She has a Bachelor and Master’s of Science degree in Chemistry from top US universities, is a former Miss Asia USA, has worked for one of the top two global consulting companies and has a fabulous personality to boot.

And that’s only the incredibly brief highlight reel.

So I had no idea what to expect when I actually met Victoria in person. Was I dressed OK? We only arrived a few hours before and I didn’t have time to re-style my hair. How would I measure up to a model of beauty without a trip to the salon and a day at the spa? Would I be able to make intelligent conversation? What’s one of those really obscure elements from the Periodic Table so I can show an interest in her discipline?

I was almost dizzy with questions by the time Victoria called to say she was in the lobby of our hotel.

I watched the numbers light up and go out as we descended the eight floors to the lobby. The doors slid open and my eyes squinted from the glare off the polished marble floors so I didn’t see her right away.

Then I heard my name, in that turned up questioning voice I use when I’m not sure if I’ve got the person’s name right.

Before I could respond I was surrounded in a hug from this person I had never met, a stranger turned instant friend.

Very few times in my life have I met someone I felt like I’ve known forever. In those experiences, the other person and I immediately start talking as if we’re old friends catching up from years lost and don’t stop until the wee hours of the morning.

I’m happy to report I was lucky to have one of those rare experiences with Victoria.

As the days and weeks turn into months of working with the three other people on this team I have a recurring thought that’s becoming a reality:

Moniker will succeed because of its people.

Thanks Christopher. Thanks Kham. But today I’m most thankful for Victoria, who adds fun and kindness to my life. These experiences are so special because they are gifted to me from an amazing and accomplished person I respect and admire.

And this is only the beginning…
Posted by Kristin Kutarna Gates at 8:58 PM

The only thing I can say is "Great minds think alike. " The mutual admiration has started from that historical weekend. It was certainly love at the first sight. :)

Now Kristin and I got our very own special anniversary day - March 15. :D